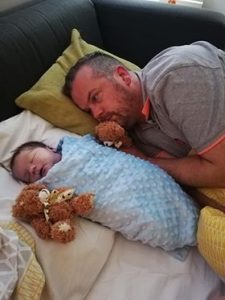 It was early January 2019 when we found out our unborn son had CDH (Congenital Diaphragmatic Hernia). We hadn’t a clue what it was, all my wife kept saying was that the midwife just said “they usually die” when she asked her what it meant. “They usually die…”, that was it, I’m not sure the midwife realised what she had said but I could think of better ways to put it. Sam, my wife, had gone to the scan on her own, as it was our 4th child and I didn’t want to waste a day’s holiday, everything will be fine I thought, it’s just a routine check-up. A few days later we went to Leeds General Infirmary, where we were told the full scale of CDH, our unborn son had a 20% chance of surviving. CDH is when there is a hole in the diaphragm and the stomach, intestines and organs have got through and up into the chest, making it hard for the lungs and heart to grow. We were given the option of termination. As long as he had a chance, termination was never an option.

Roll on Monday June 2nd 2019, I finished work, got home, packed the car and took Sam to Leeds General Infirmary. She was to stay there until her waters broke as we lived too far away, if she came on to fast, we would never get there in time. A few days passed, I finished work on the Wednesday, I spent my time travelling to Leeds to spend the day with Sam. Then on the following Monday 10th June I got the call from Sam to say it’s starting. I got to LGI as soon as I could (bumped the car in the multi-storey), then it was a waiting game.

Stanley was born at tea time, we heard just a small murmur which gave us hope, then he was taken by the doctors and nurses to the Babytherm, so they could work their magic on him. We didn’t even get a hold of him. After about twenty minutes they wheeled him out to the NICU, letting us both give him a kiss before he went. The midwife pushed Sam down to the NICU in a wheel chair as I followed so we could see him, the doctors and nurses were hard at work putting stents into him. The doctor told us he was as expected which gave us hope. We left them to it so Sam could go and have a shower and we could have a little rest back in the room.

An hour later the doctor, accompanied by a nurse, walked into the room and woke us up. The doctor told us they have done everything they could and she thought that we needed to be with him. We walked down to the NICU and watched as the doctor and nurses fought to keep him alive, then the dreaded words came, “ we’ve done all we can, you need to spend some time with him now, would you like us to call a Priest/Vicar”. We spent the night reading to him, kissing him, he was christened, we held his hand and talked to him. One of my worst memories of that night was going back to our room on my own to get his blanket and teddy, I couldn’t hold it in, I was crying my eyes out holding his teddy and blanket, walking through the hospital corridors past people, getting sympathy noises.

I didn’t want them, I just wanted Stanley to be ok. We were moved to a private room so we could spend our last few hours with him, holding him and kissing him. He passed away in the early hours of the morning. His Lungs hadn’t developed enough for him to survive.

The first call I made was just as bad as the last, people would answer and I would break down. A million feelings went through my head that day, guilt, regret, anger were just a few. We stayed for a couple of days, then when the time came, we took him down to the mortuary in a pram, all covered up, through the Hospital so no-one could see.

This wasn’t supposed to happen, I’d just started my new job, my favourite football team had just won the Champions League, this is a sign that things were going our way. What a fall down to earth it was.

My new employers were brilliant, I’d been there 3 weeks and they gave me as much time off as needed with full pay, my holiday entitlement wouldn’t be affected. I took just shy of a month off in the end.

The funeral came and went, life moved on. Stanley’s Headstone was put in the cemetery just a couple of fields away from us, a beautiful place that we can walk to in ten minutes. To this day I still feel guilty and there will always be some emptiness inside me. Christmas was when it really hit me, I thought I was managing until then. Then recently his 1st Birthday. People say time is a healer but I don’t think there’s any kind of time that will heal the loss I feel.

In May this year Sam gave birth to Walter Stanley Clayton, it was a strange feeling at first, he looks just like Stanley did. Our lives have moved on now but there will always be a special place in my heart for him. He will be with me wherever I am. I try and do a bit of Fell Running (not very well), every time I get to the top of a mountain or trig point , I hold my arm up, and point to the sky, thinking he’s pointing back down and touching my finger. Silly I know, but it makes me feel better and gives me hope that he knows he was loved so very much.