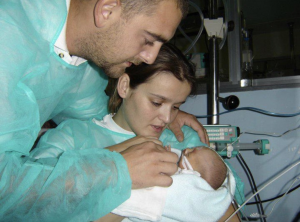 In early 2004 I found out I was pregnant and like all other new “to be” parents we were excited and scared at the same time. The early stages of the pregnancy all (appeared) to be well. We went through the various stages and all was good. The 20-week scan gave us the info we needed, all was progressing well the baby was slightly underweight but nothing to worry about.

I remember going into hospital for the 2nd scan to be told the baby was not growing at the rate it should be and we were scheduled for extra scans. The 3rd scan was where the story started taking a darker route. From going into hospital for this 3rd extra can we were informed the baby was underweight. We then went through stress tests where drugs are administered to bring on mild contractions, during this the baby’s heart rate is monitored to show how the baby reacts to the stress. The extra scans continued as did the stress tests over the next few weeks.

At around week 35 the decision was made to induce the pregnancy early as more could be done out of the womb than in, I was admitted and that’s where things started getting tough. The process of induction was started the next day. Not a pleasant experience. The baby`s heart was monitored throughout the process; several attempts were made at induction over a very long week.

The induction wasn’t going well, eventually, the baby started reacting adversely to the stress of the induction. Her heart rate was increasing, and my blood pressure was high so the decision to do an emergency caesarean section was taken. I went into surgery at 7 pm. My baby was born at 7.09 pm. I remember waking up in intensive care to the voice of my partner pleading with the nurses on the door to let him in to see me. He came in and told me our baby girl wasn’t well and she needed to go to a neo-natal hospital 50kms away. Malcolm went to the hospital with her.  He went back the following day to meet her doctors and was told that she had Edwards Syndrome possibly Patau Syndrome they had to conduct some tests to find out. She was blind in 1 eye, she had bilateral cleft lip and cleft palate. They finally then came to the decision that she had Peters Plus Syndrome.

I left my hospital to go meet my daughter as we were told that she wouldn’t live very long with the complications she had. I can remember asking the nurses if I could hold her and was told of course I could, but I was like how with all those tubes everywhere! We took a few photos of her 11 in total. They are so precious to us. She was born on a Sunday night and died on the following Friday. I can remember getting the phone call that Friday night. Even being told she didn’t have long to live it was still such a shock and our world changed forever.

We now have 2 children who know all about her as we celebrate her birthday every year by going to her beach where we scattered her ashes. I also have a Facebook page dedicated to her and ask people who go to the beach to write her name so that she can travel the world – it’s called Lauren’s Trip Around The World.