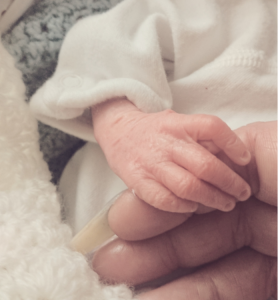 Me and my partner had been trying for a few years and had an early miscarriage the year before, we were starting to lose hope and even went for a private appointment at a clinic in the hope that we could get some help. However, after the first appointment, I found I was pregnant so didn’t need to go back.

I was booked to be having a 4D scan on the day I found out I’d lost Joey. I remember this being the only scan I actually looked forward to throughout my pregnancy as I didn’t feel anxious or worried like I did at all my others. After miscarrying in the past having scans wasn’t really an enjoyable time for me, as I was always so worried. However, after getting to 27 weeks and having started feeling him move, I finally began to relax and look forward to them.

On the morning of the scan myself my partner and my two stepchildren, Mollie and Jack who live with us, began to start preparing Joey’s room. After several testers of paints, we finally decided on a colour scheme. We knew we were having a boy at this stage and Mollie and Jack couldn’t wait to see him on the 4D scan as this was the first one they had been to. On the way there I did start to feel anxious, my partner put his hand on mine and gave me a reassuring smile, I turned to Mollie and Jack who were in the back of the car and said ‘you looking forward to seeing your brother?’ they nodded and smiled. When we arrived, we had to wait a little while, but it wasn’t long before my name was called and off we went into the room. The lady doing the scan was lovely and welcoming and she explained to the children what would happen and told them about the equipment she was using. As I led on the bed I remember saying ‘I haven’t felt him much today, he must be tired’.

Up popped the image and the lady pointed him out, ‘ahh here he is, he has his fist up in front of his face’. I asked where the heartbeat was as I couldn’t see anything, she went quiet, then I felt her squeeze my hand, I looked at her and she shook her head. My heart began to race and a wave of emotion and panic rushed through me. I looked at my partner and told him to take the children out of the room. I was crying and they all knew something was wrong.

When the children left the room, the lady told me that she couldn’t detect a heartbeat and she asked, ‘when did you last feel him move?’ but I couldn’t remember I was too upset to even think about it. She told me that his head measured at 27 weeks, and I was exactly 27 weeks that day. I was told to go up to the hospital for another scan, by this time my partner had called his dad to come and collect the children. I didn’t want them to see me so upset, but we had to get to the hospital. We weren’t far off, but it felt like it took forever, we were all crying, whilst at the same time trying to stay calm for the children. I remember thinking, it could be wrong, I was hoping it was and that the doctor would tell me everything was ok.

After another scan, it was confirmed that our baby had died. The staff were absolutely lovely and explained everything to us because I was 27 weeks, I would have to give birth to him. I was given a tablet and advised to go home and return in 2 days. On 26th March 2020 at 04:34 am I had Joey, and we were able to spend the day with him. I remember it like it was yesterday, his tiny soft hands and his little button nose. We had a naming ceremony for him and had his hand and footprints taken.

Following this, we had to plan the funeral and wait for the results of the autopsy. The funeral was beautiful, and we had him cremated, his ashes are now in a memory bear next to mummy and daddy’s bed along with a picture of him. We were able to get some beautiful pictures of him that we look at every day. It turned out Joey wasn’t getting enough blood supply, something which is apparently very common.