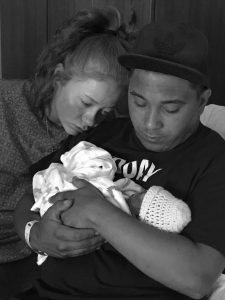 I was supposed to meet my firstborn daughter, Taytum, last year in November. It was a picture-perfect pregnancy, no morning sickness, not too many aches and pains, I was so excited. One day I noticed a rash had formed on my right leg only and at my appointment, I brought it up, the doctor had no idea and never seen something like it. He told me to keep over the counter cream on it and that if it didn’t clear up I’d get prescribed something. Fast forward some weeks to September 4th 2019, I had an ob-gyn appointment for my 30-week glucose test. I went in, did the testing and afterwards my mom wanted to take me out for pizza. As we were eating, I started to experience some lower backaches. I ignored it as my back occasionally hurt anyway.

We got home and it slowly started to become harder to ignore. Making our way to the hospital, my pain increased so fast within the drive. By the time we got to the hospital, I was taken inside on a stretcher as the pain was unbearable. I was led on the hospital bed and as the nurses checked me, I was a full 10 cm dilated and ready to push. I pushed for about 5 minutes or less and my baby girl arrived. I didn’t even get a glimpse of her at all before they took her away to NICU. Being 29 weeks & 5 days gestation, I knew she would have breathing troubles but I just knew she would fight and pull through. Little did I know that she had an infection throughout her body from the amniotic fluid.

My boyfriend of 4 years and I were woken up 10 hours after I delivered her and rushed into the NICU room where a nurse knelt down in front of my wheelchair and looked me in the eyes. She informed me that Taytum had gone septic from the infection and that they had done all they could, that she had flat-lined twice and at this point, they were just doing more damage than help. My heart felt so heavy and physically hurt with what she said next… “We need your permission to stop going forth.” How do you tell someone that it’s okay to let your child go? But she had been through a lot. I nodded and said I understand. They stopped breathing for her and the numbers dropped to zero.

Finally, she was placed into my arms bundled up but gone. Everyone imagines their first pregnancy as this perfect experience and sadly, mine was nothing of the sort. We took pictures although they aren’t the happy ones we thought we’d be taking. We got our cuddles in although it wasn’t felt by her at all. We said our last goodbyes and left the hospital, arms empty. A part of me left when she did that day, even though time stops for no one, it doesn’t get any easier. Rather you rearrange your life around the hurt and live on but never in the ways you did before. Since our loss, I’ve come across so many other amazingly strong parents and families who although their stories may differ, know the same exact hurt. It makes me feel less alone in what I go through and I share this story to not only do the same for others but to keep my sweet girl’s memory alive. She was here, she matters and she deserves to never be forgotten. We love you Taytum Brielle, our little warrior.