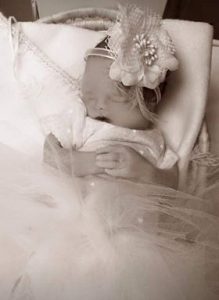 Nothing can ever prepare you for the loss of a child. Carrying a child is supposed to be one of the most joyful times of your life.

Until it isn’t. Until your body betrays you, makes an error.

Your doctor is supposed to be there to support you, your decisions and your beliefs. Mine did the opposite. He made me feel like an idiot because I refused to abort my daughter. Instead of being excited to see my daughter on the (very often) ultrasounds, I dreaded going because I knew the doctor was going to try and convince me that “my daughter was a burden and the responsibilities she will require, will ruin your healthy family.” Yes, my doctor actually said those words to me. Even after my 20th week, he said it was illegal to abort in my state* at this gestation, but I could travel to another state. That was the day my husband had enough and put the doctor in his place. My entire pregnancy revolved around fear, sadness, anger, and funeral planning. I was cheated. She was cheated, before she even had a chance.

It was not long after that I received the news that my sweet Layla Rae’s heart was no longer beating. I birthed my beautiful, still, and perfect 3 pound baby, on March 7th, 2014, at 34 weeks. Trisomy 18 killed my baby.

She may have been stillborn, but she was still born.

I regret nothing, other than I wish I would have told her I loved her, just one more time.