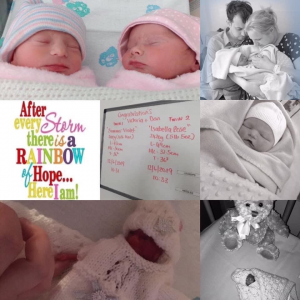 My name is Viki, I’m 33 years old & live in Burnley, Lancashire with my partner Dan & our British blue cat Brucey. We’ve been together for over 9 years & wanted a baby for 6 years! I found out I was expecting in late 2014 & had the perfect pregnancy throughout. I gave birth to our firstborn beautiful baby boy Dominic Leo on 2nd June 2015 at full term/40 weeks 3 days. Sadly, Dominic passed away unexpectedly during labour & was a stillborn angel. He was a healthy 9lb 3oz & they couldn’t find any reason as to why we lost him.

We discovered we were expecting a rainbow baby in late 2016 & were hoping this would help heal us & bring some happiness back into our lives. Again, sadly at a routine scan we were told that the baby’s heartbeat had stopped, so I had to go through the process of a late miscarriage. We delivered our second angel, another beautiful baby boy Rainbow Angel on 2nd February 2017 at 16 weeks 6 days. He was tiny but absolutely perfect. Very sadly, later in that same year we found out we were expecting only to be told again that there was no heartbeat & we suffered another late miscarriage. We delivered our third angel, another beautiful baby boy Star Aries on 9th December 2017 at 17 weeks 1 day. Just like his big brothers he was absolutely perfect.

We found out we were expecting again in late 2018 & to our absolute shock & surprise that it was twins! I was under very close monitoring due to our previous loss history, being a twin pregnancy, suffering severe pregnancy sickness & gestational diabetes having to inject insulin 4 times a day as a result of the increased hormones. I had weekly scans, extra midwife appointments, took double aspirin & pregnancy vitamins throughout. I had an extremely hard pregnancy emotionally, each of my appointments was so nerve wracking as I felt like something may go wrong again. I was advised & it was agreed to have a planned c section at 35 weeks 2 days. I gave birth naturally with my three angel babies & was really hoping I could do the same with our rainbow twins, but it was not meant to be.

The atmosphere in the planned section was nothing like I’d expected, I was shown around & introduced to everyone which instantly put my mind at ease ahead of the operation. I wanted the day to be extra special so we invited the two midwives Rachel & Lisa that were at Dominic’s birth to come & share in our day. Also, my consultant Mrs M who looked after me with each pregnancy wanted to be the one who performed the section & I’m so glad that it was her. It was important that they’d been there on the saddest day of our lives when we lost Dominic & they we’re now with us on one of the happiest days too. We were so glad they could be. My amazing partner Dan & my mum we’re in the room & I was able to have a little bit of skin to skin with the twins straight away before they took them to get cleaned up. We finally had our very special rainbow twin baby girls Summer Violet & Isabella Rose on 12th June last year, they were 4lb 10z & 5lb 5oz!

They were good weights for the early gestation & didn’t need any time in NICU, just a bit of close monitoring & extra love. They’re now just over one year old & were loving every single moment with them. Although in a very different way, I became a mummy back in 2015 to our precious angel & we won’t ever forget him, he was truly perfect along with the littler ones but these two rainbow girls brought so much happiness & love back into our lives! They are healing us slowly but surely every day.

I just want to say thank you so much to the many people who have been involved in our journey over the past few years, the nurses, midwifes & HCA’s who have helped out along the way with either our angel or rainbow pregnancies. We had so many people thinking of us & sending wishes. Thank you so much for the continued support. I want to give a very special thank you to a few people who went above & beyond to help us get a healthy living baby/babies one day. The truth is we would not be where we are now without your ongoing support both personally & professionally. There is no way we can ever show you how much we appreciate what you have done for us. Thank you so so much. We’re so lucky to have a state-of-the-art facility at Lancashire women & Newborn Centre in Burnley to help & support expectant mothers & their babies. I decided to share all of my beautiful babies & their pictures on my post as I believe baby loss awareness is so important & they each have unique stories that matter. Sending much love to all the Mummy’s & Daddy’s on here, especially those who have experienced loss or had a tough journey as well.

After our first loss, we raised over £7000 to help other bereaved families at their most difficult time & we donated a bespoke handmade crib, cuddle cot, memory boxes, miscarriages packs & knitted items to a local hospital. I embraced motherhood, just not in the way I imagined I would. Sharing my experience has become an important outlet for working through my grief, I spend my free time writing about our losses & my experience as a bereaved parent. Although my loss experiences were at very different stages, the one thing that remains the same is that we wanted & anticipated our precious babies. We love & miss them every waking moment. One of my new goals in life is to help educate others by raising further awareness around miscarriage/stillbirth/infant loss & bereavement, dealing with grief & the day to day struggles associated with the loss of a child. I’m also writing about pregnancy after loss & parenting after loss of our very special rainbow twin baby girls Summer & Isabella.