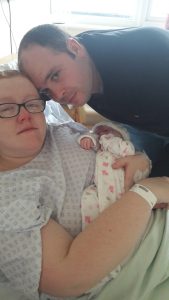 From a very young age, I had longed to be a Mummy. I dreamt of the dresses my daughter would wear along with the farmer’s cap my son would wear and even though it took me until I was 24 to meet my soulmate, my dream of becoming a Mummy never died.

Gavin and I openly talked about children and marriage from very early on in our relationship; we knew that children would definitely be a part of it all.

Fast forward to October 2018 just 2 months after we got married, we found out we were pregnant, both nervous but very excited we couldn’t wait to get our very own little family started. All systems were go from the moment we knew, I contacted the relevant health professionals, got my booking appointment booked and then the journey started.

From our very first scan, Maisie was a happy and healthy baby and this continued throughout our pregnancy, apart from the fact she was breech 95% of the time and we had 4 episodes of reduced movements we were very lucky otherwise.

Maisie always loved to let us know she was there from the moment it was possible for her to do so, she’d kick her big brother our Chocolate Labrador Captain whenever he would cuddle up to me, she’d let me know she loved my music, become lively when we were going to bed and best of all she loved Daddy reading her ‘The Wonky Donkey’, we knew pretty early on she was going to be a happy and content child.

Throughout my pregnancy I had growth scans due to my own personal weight and at 36 weeks, I was told Maisie was still breech so therefore we had to have an ECV (which for anyone who doesn’t know this is where they try to turn baby), this was attempted when I was exactly 37 weeks but it was unsuccessful so that meant an elective C Section was booked for 39 +6. The following day after my ECV I had my midwife appointment and as I was walking there which is literally 5 minutes from my house, I got this excruciating abdominal pain, I’ve never had anything like it and don’t ever want to experience it again. My midwife sent me on to the hospital to be checked and everything came back fine and the pain subsided.

Fast forward two weeks and Maisie had been keeping me in check with her movements and kicks especially when she knew I needed the loo. At 39 +1 we went to see a different midwife to who we normally seen due to mine being unable to see me, I had some protein in my urine which the midwife said was fine and she even struggled to find Maisie’s heartbeat, only for Gavin being there we wouldn’t of found it at all. That was the only time I had ever been upset about my care during my whole pregnancy.

Over the weekend I lost small amounts of blood and what I thought was my mucus plug, I contacted triage because I am Rhesus negative blood and the midwife told me it was fine I didn’t need to go in and get checked.

Tuesday 4th June 2019 came and the big day was finally here, Maisie was coming into the world. Her Nanny had travelled up especially for her birth and we were all so excited for her arrival. Arriving at the delivery suite just after 7 am we were anxious but excited all at the same time, we had our scan to check she was breech but no heartbeat was checked for, the midwife struggled to find Maisie’s heartbeat but settled after 10 minutes of searching, as far as we were aware everything was ok.

11 am was my slot for my section, Gavin and I went to theatre. The procedure started and Maisie Scarlett Killington-Parker was born at 11:50 am, we had been made aware beforehand she wouldn’t cry straight away so not to panic but she never cried at all, in seconds the theatre was filled with Doctors and midwives, I knew something was wrong. After a couple of minutes, two doctors came over to ask Gavin if he was Dad and before he had a chance to answer I asked was she dead. After having to repeat myself the doctor confirmed our worst nightmare, Maisie Scarlett was stillborn.

The moments that followed were filled with the harrowing cries of a broken-hearted mother and a father who was just wanting everything to be ok. The pain it has left us with is impossible to describe and the effects it’s had on our mental health is impossible to reverse.

Gavin has gone from a very strong man who served in Afghanistan and could take anything to now being very easily made anxious or frustrated. Baby loss doesn’t just affect us mum’s, it effects their amazing daddies too.

The one thing I will end with before I complete my story is a shout-out to all the dad’s not just Gavin, but to every man who has suffered the loss of their child no matter what age or gestation, your feelings, thoughts and emotions matter, don’t feel you have to be strong for us women, your child is as much your child as they are ours so don’t ever feel you have to be left on the sideline. Your child(ren) matter(s)  your wife/ girlfriend matters and most importantly you matter too.

Thank you for reading all about Maisie Scarlett, our baby girl in the stars.