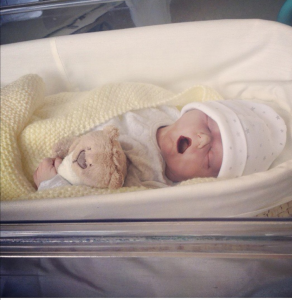 December 2013 was our 12-week scan. After a few minutes, the sonographer looked concerned. “I’ll refer you to a consultant,” she said, continuing to tell us that something didn’t look right with the baby’s bladder. I vividly remember her putting her hand on my arm and saying “Don’t worry Carly, it’ll be okay”.

Our baby was diagnosed with Megacystis – a foetal lower urinary outflow tract obstruction, which prevents the baby from passing urine. This reduces the amount of amniotic fluid and causes problems with the development of the baby’s lungs and kidneys. We were advised to terminate the pregnancy. We chose to get a second opinion, but the consultant confirmed the diagnosis. He told us that the baby would not survive past 20 weeks, but if we wanted to continue the pregnancy, he would fully support us and take on our case. Ollie and I looked at each other and didn’t even have to say anything, we both agreed we wanted to give our baby every chance we could.

At 16 weeks we had another scan, we found out we were having a boy. It was such a bittersweet moment and suddenly became real that we had a son. His bladder had grown significantly, and it was just a case of watch and wait. The consultant informed us that sadly he wouldn’t survive until the next scan so we should prepare ourselves.

I can’t even explain how it feels to be waiting for your child to die. We spent the next few weeks in a blur. The night before our 20-week scan I could feel tiny movements but brushed it off thinking that it couldn’t possibly be. At the scan, our baby boy’s heart was beating. Even the consultant was amazed.

At 33 weeks we were offered a termination again by a team of professionals. They told us that even if our baby survived the birth, he would only live for minutes. We chose to continue.

At 41+6 weeks, I stopped feeling movements. I knew something was wrong, and we went to the hospital early hours of the morning to be told our baby’s heart had stopped. I still remember the midwives’ faces, the sonographer, everything about the room. That was the moment our lives changed forever.

At 1.20 am on the 18th July 2014 weighing 5lb 6oz, our beautiful, perfect boy was born. Looking at him you would not know how poorly he was. Ollie dressed Noah in his first and only outfit and we had photos taken. We spent until 6 pm that day holding him and just watching him, hoping he would open his eyes and none of this horrific ordeal would be real. Walking out of that room and leaving him behind was by far, and always will be the hardest thing we have ever done. Nothing will ever come close to that pain.

The first night at home without Noah, I woke up suddenly and panicked looking around the room for his cot. To then realise he wasn’t there, and never would be.

We laid Noah James to rest with the words “Too Beautiful For Earth” engraved on his headstone. We both still believe that everything happened how it should, Noah decided when it was his time to go.

Our journey was hard, painful, heart-breaking and absolute torture, yet beautiful, full of love and hope. I would do it all again for just one more cuddle