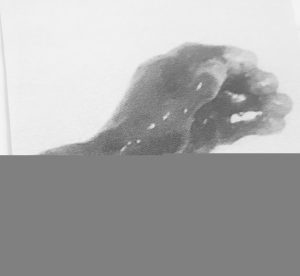 September 2017 we found out we were pregnant with you, it was a bit of a shock, but not a bad one! We were over the moon! I gave up coffee, cigarettes, and alcohol, and anything that might have made you poorly.

The day before we found out mummy had you in her tummy, we had booked a holiday to Lanzarote, All-inclusive!  Mummy wanted to cancel, but everyone said get your last holiday as a couple! One day in, the bleeding started, we were 14 weeks, and after we had hit 12 I had no clue things could go wrong! It was the worst holiday of our lives, the bleeding got stronger, not just spotting at this point. We rang the Early Pregnancy Assessment Unit, who assured us everything would be fine.

Fast forward to getting home, we arrived in Manchester at 3 am, appointment for a cervical length scan at 10 am, go for appointment, all good with you, but there is a lot of blood…. We got a picture of you and went on our way! My thought was if they aren’t worried, mummy shouldn’t be either!

We spent many an evening up at EPAU, that’s when the bleeding seemed to be worse, we always got asked is this your first? I wanted to scream why does that matter, I’m scared!? When examined they always exclaimed ‘ooooh that’s a lot of blood!’ One doctor actually told me I was going to miscarry you! This was just before Christmas, and at that point, I lost my faith in EPAU.

Fast forward to New Year’s day, we had had a turbulent few days with the bleeding, but I figured every time we went to EPAU we were told the same thing. I told daddy I didn’t feel great, something was wrong, but I didn’t know what! Daddy rang EPAU and off we went. We got the standard ‘Is this your first?’ As NYD was not on a weekend they could scan for reassurance. The next words I heard rocked our world… ‘I think your waters have broken’, we need to test to confirm. The test confirmed that there were fluids leaking. Although the coming weeks would confirm that the fact we could only see your heartbeat on the scan meant there we no fluids.

We got given 2 options antibiotics for 10 days or an abortion. Mummy and Daddy wanted you to be a part of their life, so antibiotics it was. We also got advised to ring and book an appointment at EPAU, for a scan, for the day after, only they wouldn’t accommodate mummy’s request and daddy rang. We got an appointment for the day after, as it turned out mummy would have a heavy bleed which would require me to go to hospital before my appointment! We met a wonderful lady called Mrs B, she scanned me there and then and said you still had a strong heartbeat! We were elated!

I was moved onto the Gynae ward and given our own room! I thought, ok, this is better, until the nurse in charge of me, took us to the Serenity suite, daddy said we shouldn’t go as he works with Luke’s daddy, and didn’t think it would help us, but mummy always thought the medical professionals knew best, and mummy went in, in a wheelchair but ran out of there, they thought we were going to lose you in the next few hours! We didn’t, mummy managed to go home as long as I managed to rest in bed.

Every appointment I was asked to terminate your pregnancy, but you were still fighting so, so was I! We were booked in to see one of the most amazing consultants, but as we were told he wouldn’t look at your case until 24 weeks, we missed the deadline.

Mummy gave birth to you in the bathroom, much to daddy’s shock, I rang 999, if I hadn’t we both could have died that day. Placental Abruption. Suspected sepsis and massive blood loss meant you were kept at the other side of the room in a bag! We were told it was best not to see you. Mummy saw you thanks to the really pushy 999 responder, and you looked a lot like your little sister when she was born.

Mummy and Daddy love you very much