July sees the start of the biggest annual sporting even in the world, the Tour de France and for Greg Suligowski it also signals the start of a personal challenge in support of the Friends of Serenity. Greg, who is originally from Blackburn, will be undertaking a gruelling leg of the 2011 Tour, cycling over 120 miles between  the Italian coastal resort of Sanremo and St Tropez in Southern France. 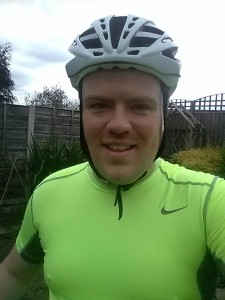 A keen cyclist, Greg has been undertaking a programme of training for the event over a number of months. Greg said “I’ve been working hard on the bike and in the gym in preparation for the challenge, I’m really looking forward to testing myself against  a small taste of the Tour experience. More importantly it will help to raise vital funds for Friends of Serenity, a charity that does such important work for families who have suffered enormous trauma. I’m humbled to be able to play even a small part in supporting such a worthwhile cause”

To sponsor Greg in his challenge and to support the aspirations of Friends of Serenity, you can click on the donate button at the bottom of the page.  Please leave comments to cheer Greg along.  Thank you!

Please leave a comment when donating so that these can be uploaded.  Thank you! 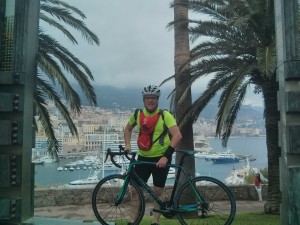 I awoke in my hotel this morning at 6, hardly the most relaxing start to a holiday in the South of France! Oh yes and the small matter of cycling 128 miles over two days was playing on my mind a bit too! But all in a good cause so off I went.

My hotel was is Nice so required an hour long train ride through to the starting point in San Remo, Italy. Unfortunately no one warned me that half of Nice also use this line to commute to work in Monaco. Being caught in a financial services scrum with your bike, whilst eating a pan au chocolate is not fun.

I reached San Remo in good time and away I went. The first hour was spent getting used to driving in the wrong side of the road and learning the rules of the road (I have now conclusively decided there are no real rules) especially in Italy. One woman came past me at about 70 with her passenger seemingly painting her fingernails as she went. (I can imagine my Mum’s blood pressure rising as she reads this).

On towards the border with France I went, through a range of gorgeous coves and sleepy frontier style towns. I passed through Latte, although didn’t have time to stop for one! I reached the boarder at Menton with time to spare.

The next stage of the journey was more challenging, steep climbs and fast descents though Cap Dali and the other towns bordering the principality of Monaco, which I reached just in time for lunch. I picked a beautiful spot overlooking the famous Casino for my break.

Two slices of pizza and an orangina later, I was back in the saddle climbing through a network of underground tunnels that cut through the headlands between Monaco and Nice. If your claustrophobic I wouldn’t recomend, but they are well lit and have cycle lanes as standard, so not too bad. They are all uphill however which meant by the time I found myself in Nice it was time for an ice cream (triple choc).

Back on the saddle for a relatively flat 20 mile run down the Cote D’Azur. Passed the Airport and endless little costal resorts and some bigger towns with interesting histories like Antibes. As I pulled into the harbour opposite the famous theatre used during the film festival, my counter read ‘distance covered 90km (60miles). With a similar distance to cover tomorrow it will be an early night for me rather than the film star lifestyle most commonly seen by the locals.

Hope you enjoyed my whistle stop account. If you haven’t already, it would mean so much if you could sponsor me using the link below, it’s an amazing cause and every penny is spent supporting parents who have experienced trauma most of us can’t even comprehend. Until tomorrow thanks for reading and for your support.

I’ve not slept as well as I did last night since I was a child. 9 hours, not a peep. Woke up to another glorious,if not very achey morning in Cannes. My host for the night Jean and his wife it transpires, both follow United and after a late night discussion around our recent demise(and a tasty local cognac), breakfast was on the house (very gratefully polished off!

I stopped for a spot of people watching in Cannes before tackling the tough assent between Cannes and Theoule, which for cycling fans out there (geeks) is a category 2 climb. I fared surprisingly well although did get out of puff towards to summit. The views over Cannes on one side and the town of Mira Mar on the other however made my efforts fell more than worthwhile.

As I descended, I came across of group of Italian cyclists heading for San Remo, we had a good chat about the Alpine weather in pigeon English and I wished them well! The rocks in this part of the world are bright red, bit like the Mojave desert in the US, this of course meant that progress was slowed somewhat by me stopping every 20 mins or so to grab holiday snaps.

The heat today ranged between 23degrees at 9am to 34degrees at 2pm, and as I neared the town of Saint Raphael, I was is desperate need of food and drinks. I found a little cafe near the beach on the run into Saint Raphael and hunkered down for the hottest part of the day.

A large cheese a ham baguette and several large waters later, I was back in the saddle on the coastal road to Saint Maxime. This was the toughest part of the journey due to the heat (early 30’s) and the roads (all dual lane and very busy). Once I made it back onto the coast road though the bay that is home to Saint Maxime and Saint Tropez opened up and the end of my journey was in sight.

As I rounded the bay through Saint Maxime,  Grimaud and finally into Saint Tropez itself, I felt really proud to have made it round the planned course. On arrival I treated myself to a shower and a rest on the beach to work on my Saint Tropez tan. A few pints of Leffe and the world cup semi later should be the icing on the cake of a fantastic journey.

I haven’t done this trip entirely for the fun of it (although if has been fantastic) but to raise awareness and funds for the friends of Serenity and what is an incredible cause. If you haven’t already, please show your support with a donation at the link below.

Till my next challenge (already got the cogs turning),  thanks to everyone for their support.