Emma is mummy to Jacob who has Mosaic Trisomy 8, this is their story: 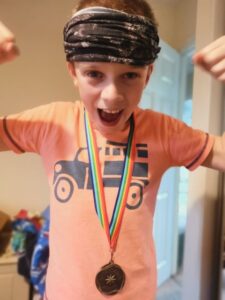 When I was pregnant the doctors found an increased nuchal behind Jacob’s neck on our 12 week scan. I had the screening for Down’s Syndrome which came back clear although the doctors said they couldn’t rule out a genetic condition. Jacob was born at 42 weeks on 30/12/08 weighing 9lb 6oz. I noticed he had large hands and feet with deep set creases in them. It was a traumatic birth with the cord wrapped around his neck. After a long night with Jacob choking on mucus and not settling he began to have blue episodes and was admitted to NICU. He spent 15 days fighting for his life, fighting off various complications, and we were told to ‘take each day as it comes’. On the 15th January 2009 my baby was discharged and we were allowed home to start our family life. Jacob was always a poorly baby and as he grew up he was behind on his developmental milestones physically and with delayed speech. He suffered from frequent urine infections so we were sent for an ultrasound and then further scans which showed his left kidney was scarred and the right one was doing most of the work. The consultant decided that because of all of his problems it was time to do genetic testing. The tests came back normal however, I insisted I wanted Jacob to see a geneticist so they referred him to see Dr Metcalfe on 12th July 2012.

On 23rd July I got a phone call confirming a diagnosis of Mosaic Trisomy 8 Syndrome. I felt so upset and worried but also had a sense of relief that people were listening to me and that we finally knew what was wrong. Jacob is now a big brother to twins Isla and Evie and little brother Isaac. He is a very happy boy who is loud, enthusiastic and loves life. He has an incredible imagination and an amazing memory. He has some autistic traits and sensory processing issues, he’s had grommets inserted and adenoids removed and a squint correction. We are still having regular contact with consultants due to Jacob’s extensive kidney problems. He is trying hard to understand his emotions and can notice when he is getting stressed or needs to time out. I have attended the Riding the Rapids course to help with his challenging behaviours which has benefited us all so much.

This past year has been challenging for him in lots of reasons including the lockdowns and isolating but he’s shown real determination to get through these times, we’ve had to do lots of explaining and using emotion charts to help him understand. Jacob started his first year in high school it’s so different to what it should be for them but he’s thrown himself into high school life and is settling well. Medical wise everything is still pretty much the same. He is still working with speech and language to help with his speech but is making some great progress. Jacob continues to be a loving happy young man with a real determination to succeed he loves his friends and loves being able to socialise we are very grateful that Jacob has been able to access school throughout the lockdowns which has been paramount to his well-being. Jacob is achieving things we were told might not be possible and we encourage him every day that he can do whatever he feels able to. He goes out there and faces everything with sheer determination to succeed. Words will never be enough to say how proud we are of him.