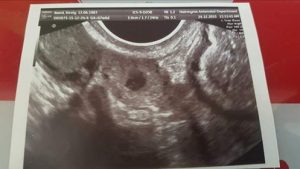 I discovered we were pregnant mid December 2015 and we were both ecstatic. I quickly realised something was wrong as I was bleeding and spotting and had really bad pain but was told there was nothing wrong and the doctors refused to scan me. I visited the doctor a few times who told me I was panicking as a first-time mum, they did blood tests once but didn’t take my concerns seriously and kept telling me it was normal in early pregnancy to have pain and also bleed. The pains and bleeding continued for a few weeks and I eventually got assigned a midwife who was amazing and booked me in for a scan the following morning, Christmas Eve. This was when our world fell apart.

I remember waiting to go in for our scan, the woman kept telling me I was too early to see anything and shouldn’t be getting seen, she was saying I don’t understand why they are seeing you. This was despite my pains and I felt so silly. We went in for our scan and saw a tiny blob (attached is our scan) on the screen and I cried with relief and excitement but, this quickly changed to tears of fear and devastation. This perfect moment was ruined as the sonographer asked for a second opinion and they told us we were having an ectopic pregnancy, it was confirmed that I was 7 weeks and 6 days pregnant. They tried to get us to go by ambulance to hospital but I refused instead saying we would go straight there as there were fears my tube would rupture and both I and the baby would die. When we got to the hospital I was given blood tests, scans and methotrexate to terminate the pregnancy and save my life. Christmas was a blur and I was in and out of the hospital over the next few days for tests and scans. The hardest thing was knowing the drugs were to kill the baby but without this I’d die as my tube would rupture. Unfortunately, the methotrexate didn’t work and the baby continued to grow so on the 30/12/2015 I was rushed in for emergency surgery. We lost the baby and my right fallopian tube. I was allowed home the following day to recover.