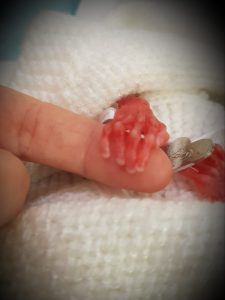 Between 2009 and 2013 we had three early miscarriages, after tests there appeared to be no reasons for these, for my fourth pregnancy I was prescribed baby aspirin, and our son was born healthy be caesarean section in 2014, he is now a healthy 6 year old.  He was four when I thought it would be nice for him to have a sibling to grow up with.

At 15 weeks, I started with some heavy bleeding, I was referred to the placenta clinic.  At this appointment, the consultant did a scan and said she thought that I had low lying placenta and placenta accreta: this is where the placenta grows through the womb often through scar tissue and can attach itself to organs.  She explained that during delivery they would need a big team in theatre, it was likely that I would need several blood transfusions and they would perform a caesarean hysterectomy, this would mean that they would cut vertically instead of the usual horizontally.  They would usually plan a delivery early so that they could ensure they would be fully prepared with the full team in theatre.  I ignored advice when I went home and I googled this, and found lots of scary stories. However, this did not prepare me for what was to come….

At just over 20 weeks I began bleeding severely and I was admitted to hospital, on the third night I passed out due to blood loss, luckily I managed to pull the emergency cord. When I came around I was taken up to the birth suite, and my husband was called in.  The consultant did a scan and Felicity was still alive and moving around, after the scan she said to us that it was time to make a decision about what would happen next, they explained that as the bleeding was getting worse each night, if I was to have another bleed they weren’t sure that they would be able to stop it.  At this point all I could think of was my little boy at home and how I didn’t want to leave him without a Mummy.  We agreed with the doctors that delivery was the only option to save my life and I had a blood transfusion. They explained that Felicity could be born alive, but as I was only 21 weeks there would be no interventions.

On the 28th March 2019 I went into surgery, there were maybe 20-25 people in there, I remember the sadness in their faces.  My midwife Sarah was stood beside me, she held my hand and never let go, to let me know she was there.  I knew immediately that she would take care of my baby girl.

When I woke up, I found out that I had lost 5 litres of blood, I was given 8 units of blood and I also had to have a repair to my bladder meaning I had to have a catheter fit.  We found out that Felicity wasn’t alive when she was born and must’ve passed away as they began surgery.   We were asked if we wanted to see Felicity and at this point we both said no, we found the experience too painful.  Through the night I spoke to 4 different midwives with each one saying that she was beautiful.  When my husband came in the morning we both agreed that we were now ready to see her. Our family and some close friends all came and had a snuggle with her.  I found it difficult to have her with me all the time and the midwives were amazing and brought her to me throughout my stay in hospital.  A few days later the consultant came to see me and said that it was the worse case they had seen and that had they not operated they believed that I wouldn’t be here now.  I feel so grateful to all these people because I get to see my little boy grow up, the NHS saved my life.

The bereavement midwife visited and talked through our options, we decided to have Felicity cremated with other babies from the hospital, as we found this comforting to know she wasn’t alone.  We received a memory box and I attend the Butterfly Friends group organised by Friends of Serenity. I am quite shy and don’t often open up at these meetings, but its comforting to know that there are other people that know what you are feeling.  It took me about 5 months to recover physically, and I am currently waiting for some counseling to help deal with everything that happened and come to terms with it all.  As a family we talk about her openly and we often visit the crematorium and take her flowers, and we remember her by lighting a candle.

When you lose a baby you join a special community, one in which you could never know existed, where you feel so welcomed but wish you didn’t have to be there. You meet amazing and strong people, all of whom have different stories to share. One where you feel sadness each time someone new joins, where you pray that no-one you know will ever have to join you.